From Website to Archive: Designing Metadata for the South Phoenix Oral History Project

In this piece, oral historian Eleonora Anedda will explore SPOH’s approach to communicate relevant and descriptive metadata to its audience; reflecting on ethics, challenges, and logistics of archiving oral histories online.

When I started working at the South Phoenix Oral History Project (SPOH) I noticed right away that the South Phoenix and South Mountain Community College Memories collection is incredibly rich, and much thought went into creating the project. Seventy-four interviews were conducted so far, both faculty members and students – over one hundred fifty to date – contribute each semester to this extensive archive. They record high-quality audio and video interviews at the narrator’s home or, more frequently, at South Mountain Community Library’s studio, and later on, they write a story per interview which then gets published on this WordPress-powered website. Each story features a detailed summary of the interview, pictures, and audio clips extracted from the interview.

In one of my first meetings with Dr. Summer Cherland I was asked to have a look at the website to determine,”Is there something we can do to make it more user-friendly?” This prompted a lot of thinking around the best ways to present oral histories online. How do we communicate the depth and complexity of an oral history to the public?

The student and faculty-written stories contextualize the oral histories, making both the interview and significance of the narrator accessible to the broader public. However, metadata or specific “information about aspects of an oral history,” such as the date of the recording, duration, and copyright etc., was not available to researchers.[1] But what kind of metadata did this project need exactly? In-depth details about the narrator were already at the reader’s disposal because of the story’s summary. Although, we were conscious that researchers might need quick and easy access to data rather than having it “buried” in the paragraphs. Therefore, we wanted to be selective, and customize the metadata so that it would serve the project and meet the needs of the audience for whom this collection was available.

When we curate an online oral history archive we must take into account the possibility that our interviews might be misused or manipulated for ill-intentioned purposes. The literature on this topic is quite clear about taking measures to contrast the dangers of open and wide access, caring for your narrator’s memories also means shielding their oral histories from the “quantum leap in distribution.” This concept, coined by Sherna Gluck, consists in the overnight jump of “a tape stored in a library […] to World Wide Web distribution.” [2] In this sense, SPOH had already taken some steps towards restricting access to the interviews by having available online only selected audio and video clips, rather than the whole recording. And, as mentioned above, SPOH invested time to fully contextualize its history: these audio clips aren’t standing alone, but are next to the narrator’s biography, photographs, and other relevant information.

Doug Boyd teaches us that the researching experience relies on the “creation of good descriptive metadata.”[3] In fact, as echoed by Elinor Mazé, metadata “serves to aid researchers and community members in finding oral histories relevant to their needs and interests.”[4] Reading which questions Cyns Nelson and Lauren Kata asked themselves as they were thinking about metadata became a tuning point in our research. “Age? Gender association? Occupation? Religion? What must we know about the staging or context of an interview? What about the relationship between the interviewer and narrator? What about the interview equipment and technical details of the interview files?”[5] Moreover, because of its similarity with SPOH, it was particularly interesting to read an article by Jaycie Vos about a UNC oral history project called New Roots.[6] Becoming familiar with New Root’s goals, what metadata they introduced and why was incredibly useful to better our understanding of the uniqueness of the tool which we were about to create.

Since it is the audience who determines the metadata – both to contextualise the interview for its afterlife and for researchers, to make data searchable, relevant, and useful – to find the best template that worked for SPOH we asked: what must we communicate about the narrator, in order to understand them within the historical context, the context of the interview and of the project?

The development of the template took several drafts. Inspired by the British Library’s approach to metadata[7], we started with a very simple layout (fig.1) featuring: type of recording, recording duration, date, location, name of the narrator and of the interviewer, subject, themes, and copyright information. 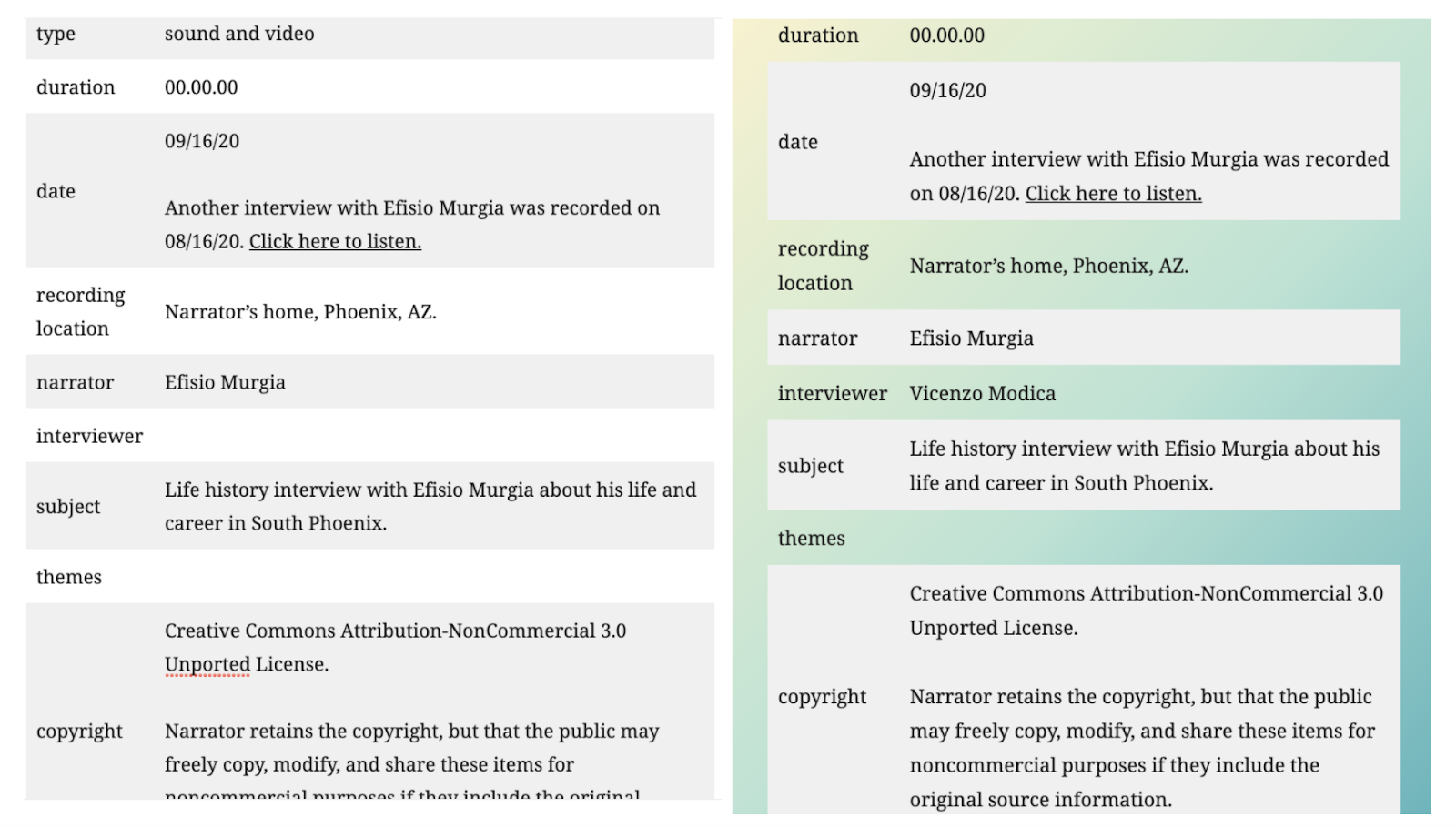 We decided to omit consistent categories throughout the collection – type, copyright, relationship between narrator and interviewer, context of the interview, equipment and tech details – and moved them to a separate page where the collection’s metadata is available.

Then we experimented. Did we need to communicate the narrator’s ethnicity, gender, or religion? We didn’t think so, but we were struck by Vos’ concept of the “narrator’s journey”and figured it was relevant for SPOH to feature the narrator’s “place of origin” and “place of residence.”[8] Moreover, because this is a land and community’s history we wanted the audience to know what role or occupation the narrators played in South Phoenix, and most importantly how many years they had been active in the area. Regarding technical details about the recording, we kept it simple by including recording duration, date, location, and name of the interviewer/s. Lastly, one thing we added which is specific to this project is “story written by,” this includes the names of the students who wrote the narrator’s biography and, if need be, faculty co-author and/or editor. (fig. 2) 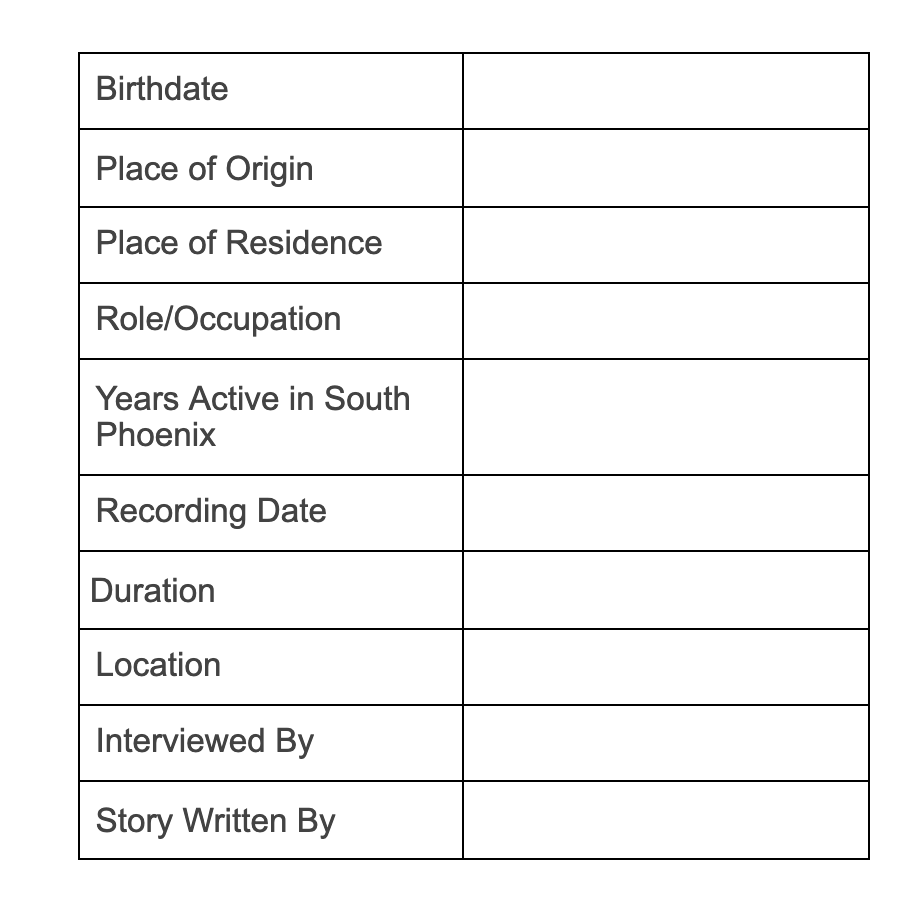 Next we implemented our tool in each SPOH’s story. As we were embedding the metadata into the website we added two rows to the table above. One with the name of the narrator and the other as a space for notes. The former because with WordPress you would have to scroll all the way to the top to retrieve that information and we didn’t want readers to be confused as to whom this metadata was referring to. While the latter was added only to note joint interviews. (fig. 3) 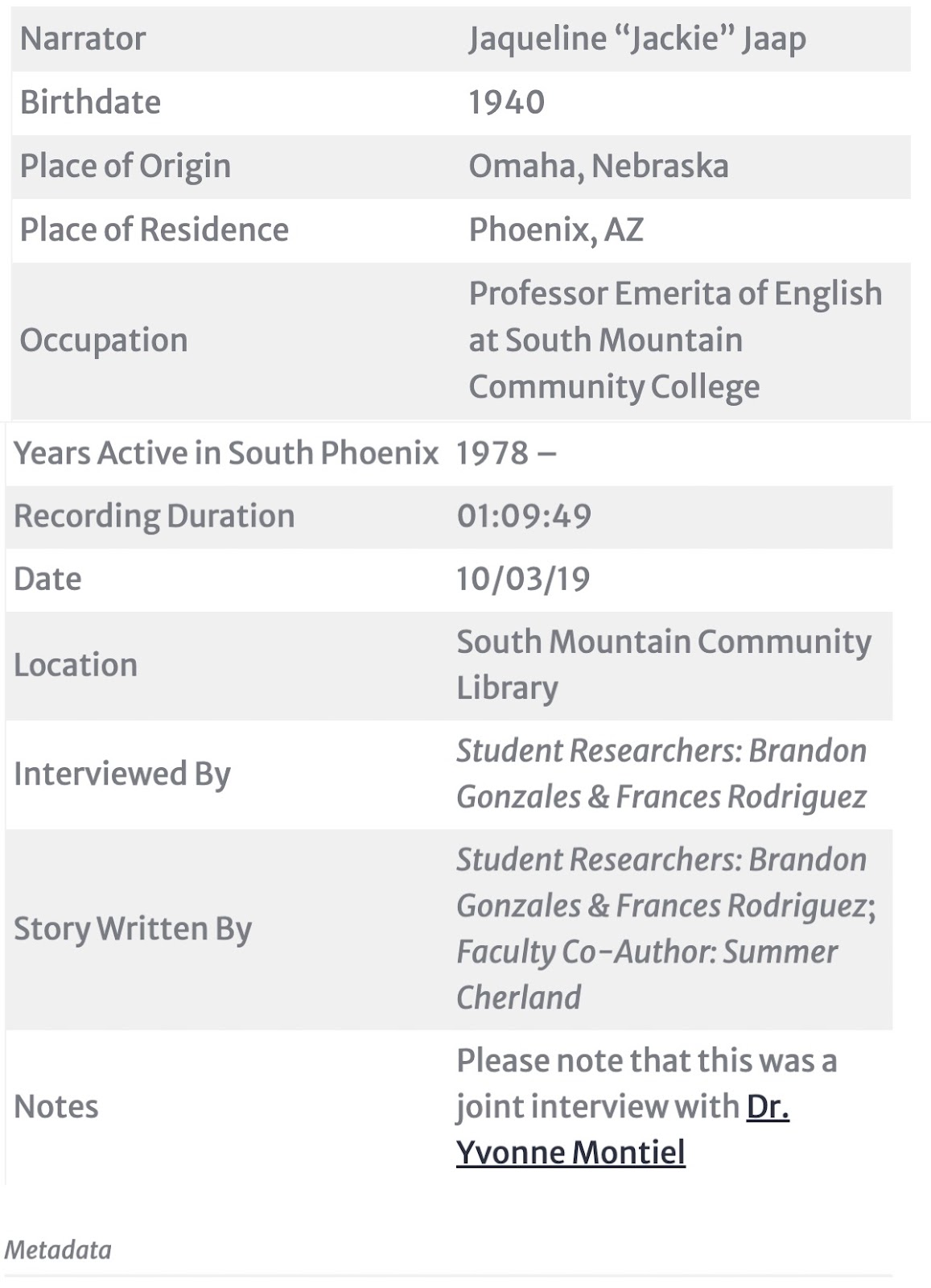 When we started this work, we did not foresee gaining valuable statistical information about SPOH’s narrators. We realized that most narrators were reluctant to fill out the biographical questionnaires, and as a result of that we could collect very few birthdates.[9] On a more heartwarming note, we noticed that (1) those who were born and raised in South Phoenix stayed in South Phoenix all their life, and (2) of the narrators who weren’t born in Arizona, who came to South Phoenix with their parents as young children, or for work later on in life, only two out of twenty-six left to live somewhere else. And that speaks volumes about South Phoenix’s community.

Our hope for the future is that researchers who are interested in our collection might use the metadata in order to learn about our project, South Phoenix, and its inhabitants. Our scope was to provide a tool that would increase the accessibility of SPOH, further contextualize the interviews and easily communicate relevant data about the oral histories. As we were researching the best practices to curate online oral histories archives we came across a vast literature which helped us forge our question for metadata: what is important for us to communicate? What do we need you to know about our oral histories? We have created a tool which we think makes our website more user-friendly, but we think we can still improve and keep crafting our tool as the audiences’ needs change over time. So, we would love your help.

Could you give us some feedback on our tool?

Eleonora Anedda is a recent graduate from the Oral History MA at Columbia University, and came to this field from a Gender and Sexuality Studies background. She is currently working as a graduate research intern at South Mountain Community College for South Phoenix Oral History Project. She is the founder and principal investigator for Lesbismo Italiano Oral History Project.